LIGHT MOTION I had the honor of dancing with the LIGHT MOTION and WHISTLE STOP dance companies at the Seattle Art Museum sculpture garden (2009) and the Experience Music Project (2014).

SILVER RINGS This is a clip from a dance piece I performed and choreographed with Lori Lawrence titled “Knot Bound”.  This piece was filmed in Olympia, WA at the Capitol Theatre (2007).

I started doing stage makeup for myself when I was a drag performer in the 1990s.  I drew inspiration from drag icons, glam rock and punk.  I was self-taught and it was because of my drag makeup that I have since been asked to do makeup design for various large scale productions.

In 2009 I was the make up artist for Sins Invalid’s performance event in San Francisco, CA at the Brava Theatre.

I was the makeup artist for the first two productions of Seattle, WA’s Queer People of Color Liberation Project. 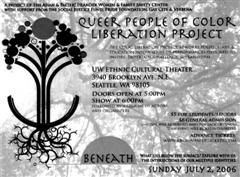 I was proud to create original makeup designs for the rock opera “The Transfused”, performed in Olympia, WA.  The makeup for this show required multiple custom-molded prosthetic facial pieces, hair pieces, and body painting.

THE TRANSFUSED CAST – IN THEIR MAKE UP